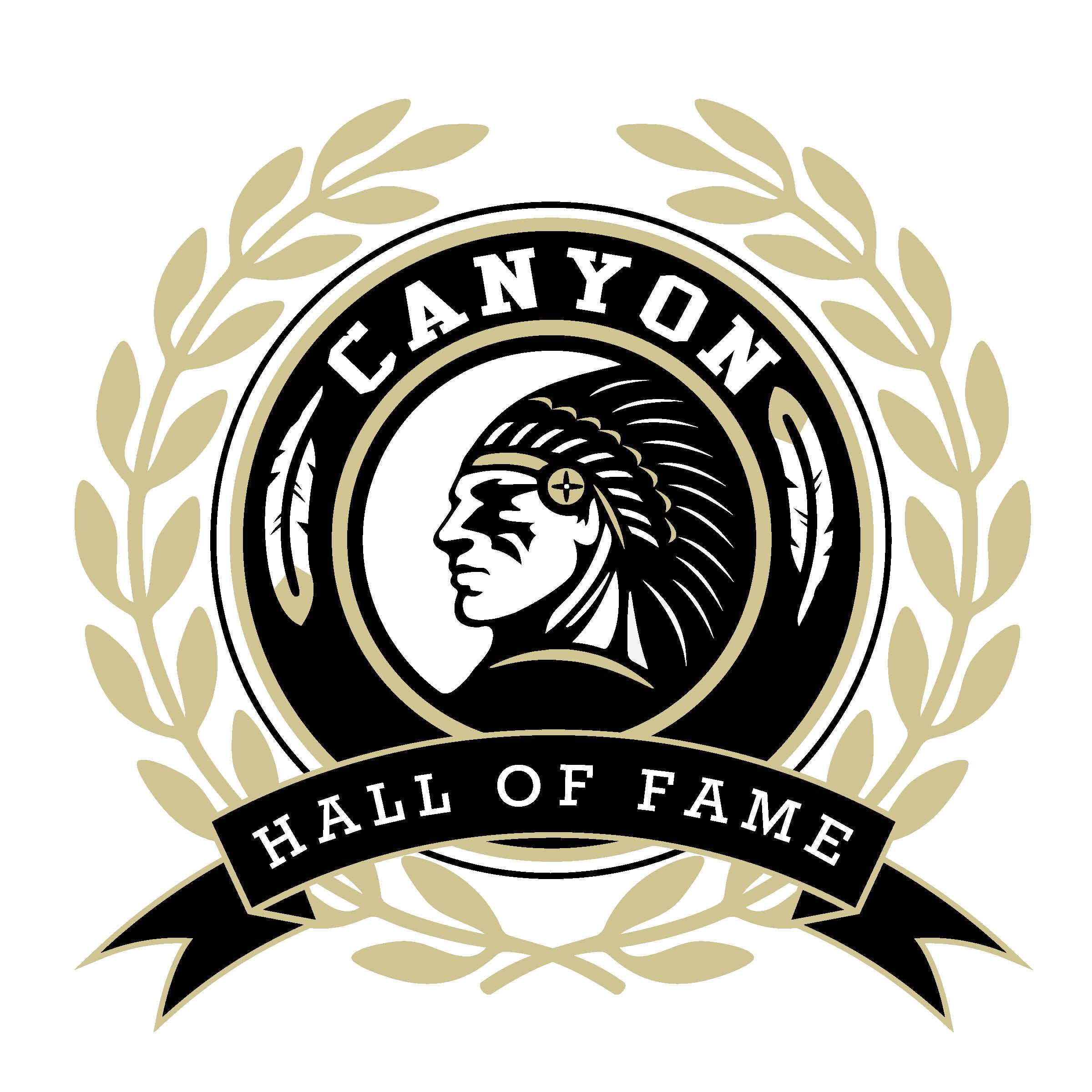 What is the Hall of Fame?

Lance Eddy - Lance Eddy served Canyon High School as a Mathematics Teacher, Athletic Director, and Coach during his distinguished career. As the Girls Varsity Softball Coach, Eddy led Canyon to 23 CIF playoffs in 26 years with a lifetime record of 497 wins and 246 losses. Off the field, Eddy oversaw the installation of Canyon’s Softball facilities and was instrumental in developing one of the West Coast’s most prestigious Softball Tournaments, the “Michelle Carew Classic.”

In 2002, the OUSD Board of Trustees renamed the Canyon field “Eddy Field” in honor of his service and commitment to Canyon and the community.  Eddy retired from teaching in 2003 and retired from coaching in 2009.

Dr. Eric Lin - Eric Lin was a standout scholar-athlete and a 3-time league champion in the Tennis program, losing only 10 sets out of the 163 he faced in high school. As the Boys 18 National Champion, Lin went on to compete in the 1993 US Open.

Lin was recruited by top ranked UCLA, and played all four years, serving as Team Captain his senior year. He is a two-time NCAA Division 1 All-American.

Lin received his medical degree and completed his Orthopedic Surgery Residency at UCLA, and was a Fellow for Spine Surgery at Rush University in Chicago.  Dr. Lin is a Board Certified Orthopedic Surgeon and practices in Orange County, CA.

Mike Weinkauf -  Mike Weinkauf attended BYU on a football scholarship, received his Master’s from the University of San Francisco, and was hired as a member of Canyon High School’s inaugural staff in 1973. Weinkauf taught English, History, and Speech and coached Football and Wrestling.

As an early adapter of video technology, Weinkauf incorporated video production into the learning curriculum and went on to play an instrumental role in developing the Television and Video Production program at Canyon High School.

Weinkauf has four children who are all educators, including his son Chris who is a current English teacher and a Golf Coach at Canyon.  Weinkauf retired in 2010 after 37 years of teaching.

Nancy Clark – Nancy Clark was one of the first faculty members at Canyon High School. She taught American Government/US History and was the Activities Director for more than 12 years. Clark also ran the Laureate Awards and was the Faculty Club Leader for multiple years. She was the lead anchor and producer of the Canyon morning news show from its inception in the late 1990’s until her retirement in 2004.  Clark was popular and well respected by her students and colleagues. She played an integral part in Canyon High School’s first 30 years. She is known for her favorite catchphrase, “If we are not having fun, I’m not going to play.”

Lou Joseph – Lou Joseph was the founding principal of Canyon High School. His dream became a reality as he laid the foundation and helped set Canyon’s traditions. Dr. Joseph was elevated to Area Superintendent for Orange Unified School District before leaving OUSD to become the Superintendent of Antelope Valley High School District.  He retired in 1993 as Superintendent of South Pasadena Unified School District. Joseph founded and has remained a contributor to the Principal’s Scholarship Fund which has been providing financial support to graduating seniors annually since 1974.  Lou Joseph is responsible for setting the foundation for who we are today.

Harold “Hi” Lavalle – Hi Lavalle grew up in Southern California, played collegiate baseball at the University of Notre Dame, and in 1973 became the first baseball coach in Canyon High School history.  In 19 years his teams won 258 games and 5 League Championships.  In 1984 LaValle’s team won the CIF championship and they were CIF finalists multiple years. He retired with a record of 453-331-17. Coach Lavalle was the 1984 CIF Coach of the Year, and the OC Register Coach of the Year in 1992.  In 1996, Canyon High School’s baseball field was named “Hi Lavalle Field” and in 2003, his uniform number 18 was retired from the baseball program in honor of his contributions.

Nina Lindenberg – A 1994 Canyon graduate, Nina Lindenberg is among the top female athletes in Comanche history. Lindenberg was the starting shortstop & hit over .400 during each of her 4 years at Canyon. She received numerous Country & CIF honors before heading off to college where she hit the most historic home run in Fresno State softball history; the game winning run as the Bulldogs won the 1998 National Championship. Lindenberg was named NCAA All-American and was on the College World Series All-Tournament Team twice. She was also a member of several USA National Softball teams that won 6 gold medals in various competitions around the world.

Eden Espinosa –Espinosa made her Broadway debut as a member of the Original Broadway Cast of Stephen Schwartz's musical Wicked, which opened on October 30, 2003. She started the production as standby for Idina Menzel in the lead role of Elphaba. She was also an understudy for the role of Nessarose.

On January 10, 2006, Espinosa returned to perform in the lead role of Elphaba for the Broadway production of Wicked, taking over the role from Shoshana Bean. Espinosa performed for the Wicked celebration of its 1,000th performance on Broadway, on March 21, 2006. Espinosa played opposite both Megan Hilty and Kate Reinders as Glinda on Broadway. She left the Broadway production on October 8, 2006, and was replaced by Ana Gasteyer.

Espinosa received the 2006 Broadway.com Audience Award for "Favorite Female Replacement", in recognition of her performances as Elphaba during her Broadway run as lead.

Espinosa was chosen to originate the role of Elphaba for the third U.S. production of Wicked in Los Angeles, which opened on February 21, 2007 at the Pantages Theatre. She opened the show with former Broadway costar Megan Hilty as Glinda. She received broad critical acclaim for the role.

Espinosa left the Los Angeles company on December 30, 2007 and was replaced by Caissie Levy. She returned to the Los Angeles production of Wicked on October 31, 2008, to reprise the role of Elphaba and stayed with the production until its finale on January 11, 2009.

Wicked Los Angeles was one of the most financially successful musicals in Los Angeles theatre history. On March 2, 2010, Espinosa took over the role of Elphaba from Teal Wicks for the San Francisco production of Wicked, on a contract which ran through June 26, 2010.

She performed opposite Kendra Kassebaum as Glinda, whom she had previously performed with on the Wicked First National Tour in San Francisco. Espinosa has appeared on various television shows, including Law & Order, Robot Chicken, and Dog Whisperer. She had a recurring role in 2009 as the voice of Sasha Caylo on the super robot animated series Titan Maximum, an original show developed for Adult Swim. In 2007, the ABC series Ugly Betty included performances of "I'm Not That Girl" and "Defying Gravity" in the episode "Something Wicked This Way Comes" featuring Espinosa and other members of Los Angeles Wicked cast. She has also appeared on the Today Show in 2004, the Macy's Thanksgiving Day Parade TV broadcast in 2004, The Tonight Show with Jay Leno in 2007, and as a performer on the 2008 Tony Awards.

In 2011, she appeared on the animated sketch comedy series Mad episode "Force Code / Flammable" as Katy Putty, a Katy Perry parody made out of Play-Doh who sings about flammable things, and performed "Flammable", a spoof on Perry's song "Firework".

Doug Neely – Was the 1983 Orange County and CIF Men’s Soccer Player of the Year while at Canyon. Following his collegiate playing career, he was drafted by the New England Revolution and played professionally for 15 years.

After graduating from Cal State Fullerton with a degree in Political Science, Nestande became the congressional campaign manager for Sony Bono. Following Bono’s death in 1998, he served as Congresswoman Mary Bono’s Chief of Staff until launching his own political career in 2000. In 2008, Nestande became a California State Assemblyman in the 42nd district, and then ran for Congress in 2013.